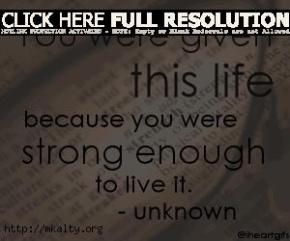 So, my little brother is in jail. He has been for over 3 yrs. I deal with it, by not dealing with it. In turn, I’ve become a prisoner of my own emotions. When I got the call, I lived on the other side of the country. I had a private break–down that night, outside the house so I wouldn’t disturb my own family. When I got control of myself,  I made a bee-line to the gym (as usual).

The next time I saw him was about 6 months later for sentencing. He had a family of women stand up on his behalf. He looked different than I remembered. His short, sharp haircuts transformed into a head of small neat plats braids. He was always slim, but he looked slimmer. He couldn’t communicate w/us. I could hardly look at him… It is a complete balancing act of keeping yourself together emotionally in such a distressing situation because you KNOW you have to be strong for other family members… for him…

(Deep breath) Everything else is a blur. I don’t remember how much time he was sentenced to. I can’t remember the color of his jump suit. I remember holding my younger sister because she broke down in a yelling and crying fit. What do you do? How do you deal with that.  To add insult to injury, a small amount of time later, my family and I flew back across country to return to our lives. I then had to balance my home life & responsibilities, with my own emotional response to the hardships my parents, sisters & my brothers’ family and I privately battled.

I tried writing him. The letter got lost in the mail and was returned to me months later. Every blue moon, my mom would 3 way me in calls, so I could talk to him. That was nearly too much. The only reference I have to prison life is TV. Both reality and scripted shows are far too scary for me to in vision my baby brother in. I had friends who were prison guards. Their perspective wasn’t much different than what i saw on TV.

I wrote my brother when I moved back w/my family. He has beautiful insight now. I pray he maintains that once he’s free. I currently live with my mom. I can’t bring myself to answer the phone when he calls. I got PISSED when he wanted us to call non-family members. It was like a smack in the face. It made me feel like he didn’t appreciate all we did. What we sacraficed… Lately, he’s been more empathetic & I must say I miss my brother. Just a conversation about nothing is the world to me.

For a long time,  my sisters & I told our children their Uncle was on vacation. I ended up telling them while we lived in Miami. Now they kind of walk on the tight rope when their cousins bring up their Uncle and his vacay. The children are getting older, they ask probing questions they they expect an answer to. They’re no longer easily distracted. They notice that we change the subject. What’s worst, he has a little girl. Who protects her? Her mom is awesome about them visiting. I can’t imagine the emotional distress that child is under.

A few months ago, he had parole hearing. My parents, granny, his girlfriend, daughter and I went.  I also had to bring my son because his dad was sick. My sisters couldn’t come, so I felt… incomplete. The worst experience of my LIFE was when the nice security guard had to pat my son and me down. We had to take off our shoes, put our hands on the wall, with our legs spread. Then the guard patted us down. At that moment, I said a prayer that I find myself praying often, BEGGING God to protect my son & never let him experience this again. I had to take down my bun, as bobby pins are not allowed in. I had to remove my broach, as they offered a possible hazard. I had to clean up my tears because I didn’t want to make a scene, nor make any other family member break. I also felt guilty. I didn’t feel it was fair to my other family members for me to have such an emotional response. Especially before we even saw him. Before we entered the room where the Hearing was held,  we were told not to talk to or touch him. Inside the room, my brother spoke so eloquently. He mentioned all of the accomplishments he managed to achieve during his imprisonment.  I felt like crap that we couldn’t be a part of celebrating his achievements, as he achieved them. I remember the sound of his voice b/c I COULD NOT look at him. He had a head full of beautiful dreads. He looked bigger. Healthier. As we were leaving, the guard let us say bye, but no touching. He saw my 5 yr old, who was a toddler when he saw him last. My son went to hug my brother, instinctual, & the guard yelled “NO!” which startled my son. Damn! How do you describe that… I can’t. Needless to say, I cried like a baby on our way out, in my daddy’s arms.

Another hard thing to deal with is my family’s response. My mom is so delicate. How do you advise a person, you parent, to deal with this without seeming cold, shallow, selfish, unconcerned, bossy, emotionally removed? I deal with it by not dealing with it. When something reminds me to deal with it, I cry uncontrollably then go through a rollercoaster of emotions from guilt, anger, embarrassment, selfishness, empathy, feeling sorry for everyone… it’s a mess. To feel in control of myself, I go back to forcing myself not to deal w/myself emotionally. I have to use what strength I do have to help my family.

I wrote this today to vent. I wish I had a suggestion, but I don’t.  I just know how helpful writing is to me & I pray that it helps a non–incarcerated prisoner feel less alone.